Significant events during the second quarter 2018

NIO moves to complete the economic feasibility study of the Blötberget mine project, and the market continues to look promising

Following the appointment of Golder, to conclude the final stages of the technical and economics of the feasibility study, work has commenced to specify the equipment required and the final design of the mine layout in order to execute the construction of the mine. At the mine location some final site investigations will be undertaken in the proposed industrial area, where primarily the process plant, associated materials handling equipment and rail terminal are planned.

In order to secure the completion of the feasibility study during the remainder of this year and early 2019 NIO successfully concluded a rights issue in June.

Copperstone Resources AB has distributed shares in NIO to its own shareholders, giving NIO some 9 000 shareholders now on the register. This provides a large shareholder launching onto the First North.

Recent discussions with two of the most pre-eminent analysts in the iron ore Market, CRU and WoodMackenzie agreed with the general view that we have a two tier iron ore market developing, with the standard 62%Fe index and a newer index for 65%Fe reflecting the higher quality ores. The divergence of the two indices reinforces the fact that there is a high demand for good quality iron ores >65%Fe. This, as stated before is largely driven by China and its environmental policy, but is also influenced and exaggerated by the fact that coking coal prices have more than quadrupled recently. This means that one of the primary sources of energy for melting the iron ore (and waste rock with it) has become very expensive and this in turn is driving the blast furnaces in China to look at improving the quality of the feed materials to the blast furnace and to improve the productivity from the existing operating furnaces. To do this they are looking at using more locally produced pellets, but they need to improve the quality of the feed to their pellet plants. This has resulted in the unusual situation where the concentrate price carries a further premium over the standard sinter feed prices.

See the recent evidence of the diversification of the two markets in the diagram below. 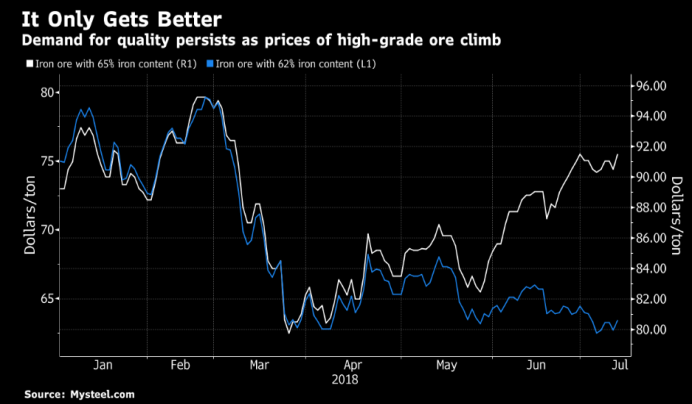 Premiums for all quality ores, including pellets remain very strong, and are expected to remain so for the next couple of years at least. There appears to be little in the way of new supply of high quality iron ores (especially magnetite rich) to satisfy demand, especially as there are only a few developments able to return to production without raising major amounts of capital. Those who are able to return to production or start production are also low volumes and will not fully meet demands.

After discussions with CRU and Woodmac they will now include production from Nordic iron Ore as a strong likelihood from 2021. This should see NIO get a mention in all the international magazines and should feature in investor’s calculations, all of which will provide valuable additional attention to NIO.

Nordic Iron Ore Group is a mining company with the ambition to revive and develop the iron ore production of Ludvika Mines in Blötberget and Håksberg. The company also intends to expand its mineral resources, and upgrade them to ore reserves, primarily through exploration and other studies of the connecting Väsman field. The Company has all the necessary permits in place for the mine in Blötberget and will be able to produce iron ore of extremely high quality.