Significant events during the second quarter 2016

The iron ore market price for 62%Fe iron ore has made a major surge again to well over $70/t (See figure below). 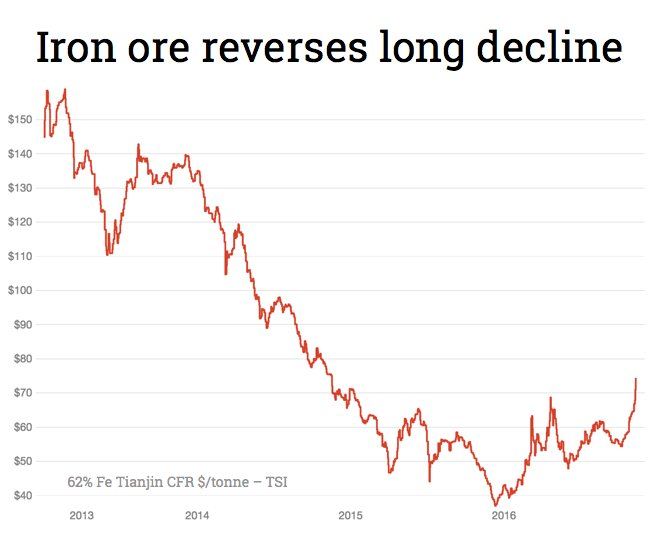 Many observers are still puzzled. but the following facts have contributed to the maintaining the strength of iron ore prices.

More telling is the fact that the iron ore futures have been rising steadily over the past few months in defiance of what many of the analysts have been predicting. The 2019 calendar year average has risen almost 30% and shows little sign of returning to unrealistically low values seen previously.

Quality premiums, in Asia in particular. are seen to be rising, with an increase in values rising as high as $9/t between the 62%Fe fines and 65%Fe – values not seen for some years. Furthermore, premiums for other high quality or value-added iron ore products are reaching the highest levels seen for some years.

These increases in the premiums for quality iron ore products potentially provide NIO with improved profit margins and reinforce the general view that continued shortages of quality ores will continue to maintain these premiums for some time.

All of this evidence is beginning to reinforce a case for investment for the future.

NIO continues to carry out the next step of the feasibility study by the appointment of specialist consultants for the geotechnical and hydrogeological assessment as a precursor for the mine design and scheduling phase of the study.

However, this work requires additional financing and the board is presently evaluating alternatives to raise the funding needed

Nordic Iron Ore Group is a mining company with the ambition to revive and develop the iron ore production of Ludvika Mines in Blötberget and Håksberg. The company also intends to expand its mineral resources, and upgrade them to ore reserves, primarily through exploration and other studies of the connecting Väsman field. For more information, see www.nordicironore.se.